Over the years we have built an amazing group of recipe testers - our friends and family! I am so grateful for them because they keep me on my toes - and make sure our quality control is top notch! So when I sent this Instant Pot shredded chicken taco recipe over to one of my top testers, I thought I knew what to expect. Boy, was I wrong!

This Instant Pot shredded chicken taco recipe was tested by our friend Jenny who tells it like she sees it. When she first read the recipe she immediately called me out! Why? Well, I’ll get to that later.

You should know though, that one taste of this shredded chicken taco changed Jenny’s tune - and she ​might h​ave even said it’s her new favorite. I know! Can you believe it?

This is a Quick and Easy Chicken Recipe!

Let's talk first about what's in this 2-ingredient chicken recipe!​ ​Well, it is pretty simple really... boneless, skinless chicken breasts and 1 cup of red enchilada sauce! Yep, that is it! I do use a few pantry staples like salt, pepper, and olive oil but those don't even really count as ingredients do they?

What are the ingredients in enchilada sauce?

What I love about this recipe is that it harnesses the ​#pantrypower​ of a can of enchilada sauce! Red enchilada sauce is a thick sauce that is made up of chili powder simmered in a sultry broth with garlic, onion, tomato paste/sauce and thickened with either flour or cornstarch. Enchilada sauce is a flavor bomb for your taste buds and hands down the easiest way to get dinner on the table!

Are all brands of enchilada sauce gluten free?

Unfortunately, no! Many enchilada sauces may contain wheat or malt as a thickening ingredient, but there are quite a few household brands that boast naturally gluten free enchilada sauce, so it is key to read the labels when shopping. Alternatively, if you aren't in a time crunch or you are just feeling EXTRA, you can make your own ​homemade enchilada sauce​! It is actually a pretty quick process and even more delicious than using store bought, canned enchilada sauce.

The Basic Nuts and Bolts of Chicken Recipes

Are you curious why Jenny was so irritated at me when she first read this recipe?!

Well, it is two-fold really... but before I get to that, you need to know that Jenny is my most practical recipe tester of the bunch which I really appreciate! She's a real-deal mom of 2 very busy, HUNGRY, boys and she always keeps me on my toes when it comes to creating delicious recipes that work for today's modern family.

What can I do with the extra enchilada sauce?

The easiest and most delicious way to use up that extra sauce is to make my Easy Tex Mex inspired canned black bean recipe. Since my husband is a vegetarian, I always have to consider him when making meaty main dishes. These beans are the perfect side dish for the Instant Pot shredded chicken taco recipe (and can become an awesome main dish for him).

Simply add any enchilada sauce remaining in the can to a small pot along with drained and rinsed canned black beans. Simmer for 7-10 minutes to let the flavors mingle, then serve. I know this might sound so simple that it’s a little ridiculous - but I’m telling you - TRY IT.

I have to say that Jenny has me on a roll with this leftover enchilada sauce thing. I’ve got a couple more ideas in the final stages of recipe testing (with you-know-who), so when they’re done, I’ll update this post for you. I promise, when I’m done with this jenny-challenge, you will have zero problems using up the rest of that can!

How Do You Shred Chicken?

Oh yeah, I almost forgot that there was a part-two to Jenny’s fury. She was also frustrated because I instructed you to shred the chicken with 2 forks, which is annoying (and “takes just about forever”). Jenny uses her stand mixer to shred chicken. She says it is way easier and faster with minimal cleanup. I have to admit, it was kind of genius.

So, I did some research, tested all the ways to shred chicken and have gone into lots of detail below. Happy shredding however you choose to do it!

Pour 1 cup of red enchilada sauce over the chicken in the Instant Pot.

Place the lid on the Instant Pot and set the knob to "Sealing". Cook on high pressure for 7 minutes.

As soon as the cook time has expired, cancel the warming function, then cover the steam nozzle with a kitchen towel and carefully flip the knob to release the steam manually.

Once the steam has escaped and the lid is open. Check to be sure the temperature of the largest chicken breast reads 165°F then shred the chicken using two forks. Once shredded coat the chicken completely with the cooking liquids. Alternatively, you can shred the chicken with a mixer. See below for details!

What to do if the chicken breast isn’t done at the end of the cook time?

What is the easiest way to shred chicken?

Believe it or not, the easiest way to shred chicken is with your mixer! Either a ​stand mixer​ or a regular old ​handheld mixer​ will work.

How To Shred Chicken With a Mixer:

Simply place the chicken in the bowl of a ​stand mixer fitted with the paddle attachment​ or in a large mixing bowl if using a hand held mixer.

To shred using a stand mixer simply turn the speed to "stir" and watch as the paddle shreds the chicken to the desired consistency. To use a ​hand mixer fitted with with two whisk attachments​, blend the chicken on the lowest setting, gradually increasing speed if necessary. Blend until all of the chicken is shredded.

How To Shred Chicken By Hand:

No mixer? No problem. You can also shred the chicken with two forks (as called for in the recipe). You can either leave the cooked chicken in the bowl of the Instant Pot for this or you can transfer the chicken to a cutting board. Securely, hold the chicken breast in place with one fork then use a second fork or your fingers to pull at the chicken and it will shred off in small pieces.

Can you make this recipe without shredding chicken?

Yes! Instead of shredding the chicken, you can simply slice or dice it then toss it back into the cooking liquid. The texture is different, but the taste is still 100% delicious!

I have another delicious Shredded Chicken recipe for your weekly meal plan too!

This is our go-to super easy and affordable salsa chicken recipe and it has instructions for baking in the oven or cooking in the Instant Pot!

This shredded chicken recipe takes on the flavor of whatever type of salsa you cook it in, so feel free to swap up the flavor notes and play around with the end result!

If you’ve made this shredded chicken taco recipe I would be so grateful if you would rate the recipe and let me know what you think in the comments below! 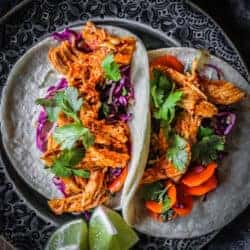 Don’t forget to rate the recipe with a STAR rating and let me know what you think about this shredded chicken taco recipe in the comments below. I just love hearing from you. Your reviews/comments really help other people that visit This Mess is Ours!

The cook time reflects the amount of time needed for the Instant Pot to come to pressure, which is typically about 20 minutes from it displaying "On" across the screen. Once heated and at pressure the 7 minute cook time countdown will start.

Shopping cart0
There are no products in the cart!
Continue shopping
0