How To Prep Artichokes 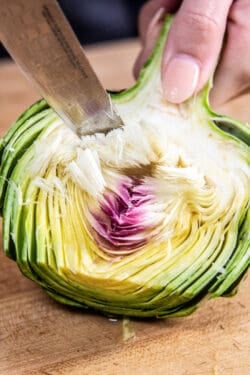 Prepping a fresh artichoke can seem like an intimidating task, but once you know what to do I assure you it couldn't be any easier. Although, it is a bit messy - I think sometimes the mess is part of the fun!

Remove the bottom leaves of the artichoke by pulling them off and slice off the stem.

Carefully, snip the prickly parts of the outer leaves using sharp kitchen scissors to give them flat edges.

Rub the remaining lemon half all over the artichoke, paying special attention to the areas where you’ve cut it.

Next fully submerge the artichoke into the prepared ice-bath.

If you need to remove the hairy choke from the center of the artichoke before cooking like when roasting artichokes in the oven or grilling continue with the steps below.