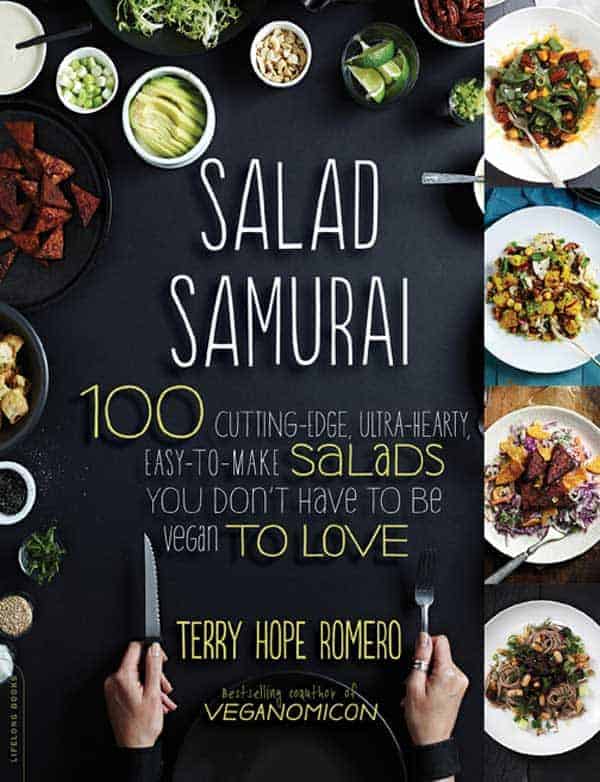 Time for my second Vegan Mofo cookbook of the week and I could not be more excited to share Terry Hope Romero’s Salad Samurai: 100 Cutting-Edge, Ultra-Hearty, Easy-To-Make Salads You Don’t Have To Be  A Vegan To Love!! If you haven’t heard of Terry Hope Romero before today then I implore you to read this post and then do a little Googling. Terry’s recipes first caught my taste buds attention on her blog Vegan Latina and I soon became a huge fan of her cookbooks as well. Terry is the best selling co-author of Veganomicon and has also authored other vegan cookbooks such as Vegan Eats World & Viva Vegan, just to name a few.

My husband has been a vegetarian for his entire adult life. He travels quite a bit with his job and his main complaint has been that at almost every company dinner or corporate shin dig his meals are an afterthought to the meat and seafood courses everyone else are fed. He usually spends week long trips eating limp over dressed side salads and rice with some sort of side dish mish-mash. He dreads the meals when he goes on these trips and what’s even worse is that these lack luster meals he has been served have ruined the idea of having a hearty salad for dinner at home.

When I first picked up Salad Samurai I noticed that in Terry’s introduction she had the same complaint that I hear from Todd. This book is all about making salads that DON’T suck, but salads that eat like a meal. Terry says ” The only thing that we (as in all the vegans, vegetarians, and even omivores in favor of meatless meals) must do is rescue salads from their sucktastic reputation as wimpy fare.”

Besides the innovative recipes and the beautiful images one of my favorite things about this cookbook is that all of the gluten free recipes are clearly labeled for readers. Most of the recipes that are not gluten free are really easy ingredient swaps too like substituting gluten free croutons for regular.