Have you ever wanted to know how to grill corn in the husk? Succulent fresh summer corn is almost ready to be harvested in our garden, and we can hardly wait! While there are lots of easy, delicious ways to prepare corn, grilling corn in the husk is a simple way to impart lots of smoky flavor without drying out the kernels inside.

How to select the best tasting ears of summer corn at the market.

Picking the freshest ears of corn at a grocery store or farm stand is a lot easier than you'd think! Just please, whatever you do, don’t peel back the husk! This shortens the shelf life of the corn, causing it to dry out.

Instead, take a look at the outside of the corn, the husk. You want the corn husk to be bright green and wrapped tightly against the corn. Don't choose any husks that are starting to yellow or feel dry, which means they aren't the freshest ears. Also, be sure to check the husk for small brown holes; this can mean insects may have made their way into the ear of corn and should be avoided.

The silks should be light brown or gold-colored and have a slight stickiness to them. Take a quick sniff of the silks bursting from the end of the cob AKA the tassel —if it smells sweet, you are good to go. If the corn has a dry or black tassel or a tassel that feels mushy, the cob is old.

Lastly, take a peek at the bottom of the corn where the ear was broken off the stalk when it was harvested. If this area of the ear is brown, the corn is at least a couple of days old and not the freshest choice in the bin.

To shuck or not to shuck, that is the million dollar question!

Did you know that corn grows with its own moisture protection system? It's true!

The husk and silks that surround the entire ear of corn act like a barrier system that keeps moisture locked into kernels until you are ready to eat them. When you cook corn inside the husk it helps prevent the kernels from drying out before the corn is cooked. Pretty genius huh!

When learning how to grill corn in the husk, the corn prep is actually the most important step!

There are very few steps to preparing corn for the grill. The steps below will help ensure that moisture and flavor stay locked into each ear of corn as it cooks.

Brine those ears of corn like you would a turkey for Thanksgiving!

This step is essential in my opinion for cooking corn in the husk on the grill. Not only does the soak in water hydrate the husks and ensure they don't fizzle up as soon as they hit the grill. But, the salt in the equation actually adds to the flavor too.

Let's fire up the grill and show you how to grill corn in the husk!

Watch me make corn in the husk 2 ways on Atlanta & Company!

Now that you know how to grill corn in the husk, let's talk about some other fresh corn recipes you should try!

How to Cook Corn on the Cob in the Oven

This hands-off oven roasting method yields the sweetest most succulent oven-roasted corn on the cob that you will ever taste.

If you’ve made this grilled corn in the husk recipe I would be so grateful if you would rate the recipe and let me know what you think in the comments below!

Grilled Corn in the Husk 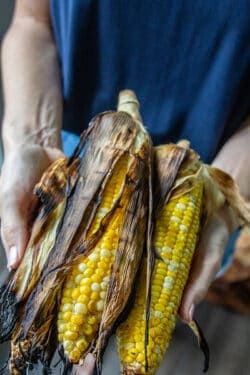 A little smoke and char enhance the sweetness and bring out the true flavor of corn. This traditional grilled corn in the husk is best served slathered with butter and sprinkled with salt.

4 ears of corn in the husk

Peel back the husks of the corn without detaching them from the cob. Remove the silks and fold the husks back into place to cover the corn.

Dissolve ½ tablespoon coarse salt in a sink or large bowl of water and soak for at least 15 minutes or up to 8 hours.

Preheat the grill to medium-high heat.

Remove the corn from the water and shake off excess water so that it's not dripping.

Place cobs on the grill and cook for 15-20 minutes, turning occasionally.

Once the corn is cooked to your liking remove it from the grill, peel off the husks and serve with butter, salt & pepper.