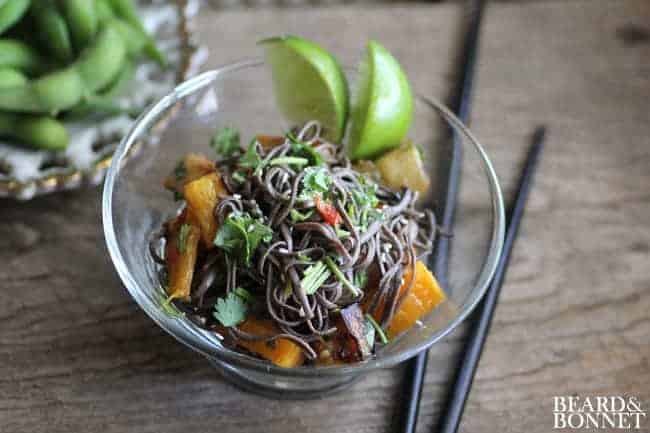 I am so excited about Halloween this year! Last year we had recently moved to Atlanta and poor Kash was still dealing with the chronic cough and ear infections brought on by his gluten intolerance. Needless to say there was hardly any extra time for Halloween festivities much less decorating and planning a Halloween dinner that was healthy and festive. To be completely honest, I probably could have put out a decoration or two, but the thought of unpacking the Halloween boxes after just having unpacked an entire house was too much for me to deal with. Did I just get kicked out of the running for mom of the year? Anyways, this year I vowed to redeem myself and plan something that I could prepare in advance on Halloween day.

My neighbor brought over a few of the remaining eggplants and peppers from her families garden this week and they became the main inspiration behind this spooky dish. Last night we had a trial run of our Halloween dinner and it received a raving 4 thumbs up! I prepared the noodles and roasted the squash earlier in the day and fried up the eggplant right before serving. I served the dish with a side of edamame, Eliza popped the edamame beans out of their shells and mixed them in with her pasta…maybe I should have thought of that because it looked really delicious her way too. *The eggplant can be cooked in advance as well; I just have a love-hate relationship with the vegetable. I love it hot and crisp; I hate it cold and definitely can’t handle the soggy texture that eggplant can sometimes have. Ick!

I ordered my black bean pasta from Navan Foods when I ordered the soba noodles for my homemade vegetable ramen. I was a little worried when I opened the package and the black bean noodles were thin like little pieces of straw, but they bulked up to at least double their size. They are really forgiving if you cook them a little over, have a great texture, and an awesome flavor that surprisingly doesn’t taste like beans at all! I have always been intrigued by black pasta, but the thought of eating one that is colored with squid ink makes me really squeamish. These noodles are perfect for our family they are organic, vegan, gluten-free, squid ink free and pack a whopping 20.5 grams of protein!  Hooray! You could always sub in soba noodles for the black bean noodles in a pinch it wouldn’t be that spooky, but it would still be delicious. Happy haunting!

Salt and pepper to taste

Bring a large pot of salted water to a boil and cook the noodles for 6-8 minutes or until cooked through. Drain and rinse well under cold running water. Shake off as much excess water as possible, then spread the noodles out onto a kitchen towel to dry for 5 – 10 minutes. *Soggy noodle salad would be pretty gross! This step is super easy but probably one of the most important steps of the dish. If you leave the noodles to drain in the colander they will clump together into one big mass. While the pasta is drying I like to toss it occasionally just to make sure there are no clumps forming and that all of the little pockets of water have a chance to drain off.

Grated zest and juice of 1 lime

In a small saucepan combine the vinegar, sugar and salt and heat gently over medium-low heat for about a minute until the sugar dissolves. Remove from the heat, add the chile and garlic then set aside. When the vinaigrette has cooled add the lime zest and juice.

When the pasta has drained completely toss half of the herbs, the vinaigrette, onion and noodles together in a large bowl and leave to marinate for an hour or two.

Preheat oven to 400° F. Peel the butternut squash with a vegetable peeler and cut in half. Scrape out the seeds with a spoon and discard. Cut the squash into cubes about 3/4 inch in size, be sure to make uniform cuts so that the squash all cooks in the same amount of time. Place on a baking sheet lined with parchment paper and lightly drizzle with olive oil, salt and pepper. Toss to coat and roast in the oven, tossing occasionally for about 30 minutes. This may take a little longer depending on how big you cut the squash. When the squash is tender and golden brown it is done, remove from the oven and set aside to cool.

Heat the sunflower oil in a cast iron skillet over medium to medium-high heat and shallow-fry the cubed eggplant in 3 or 4 batches. As the eggplant crisps and turns golden brown turn the pieces with tongs to cook the other side. When cooked through and crisp remove the eggplant to a paper towel lined baking sheet and sprinkle liberally with salt.

When all of the components are ready toss the remaining herbs, eggplant and squash together to mix and then toss this mixture with the marinated noodles. Sprinkle with sesame seeds to taste and serve with lime wedges.

*You can mix the squash and eggplant in with the noodles when they are marinating if you would like, but I think that the veggies get too soggy that way.

We are happy to have shared this post at the Gluten-Free Friday’s link up party hosted by Vegetarian Mama, Eat.Live.Make, and Gluten Freed R.D.!  Hop on over to find more great gf recipes.