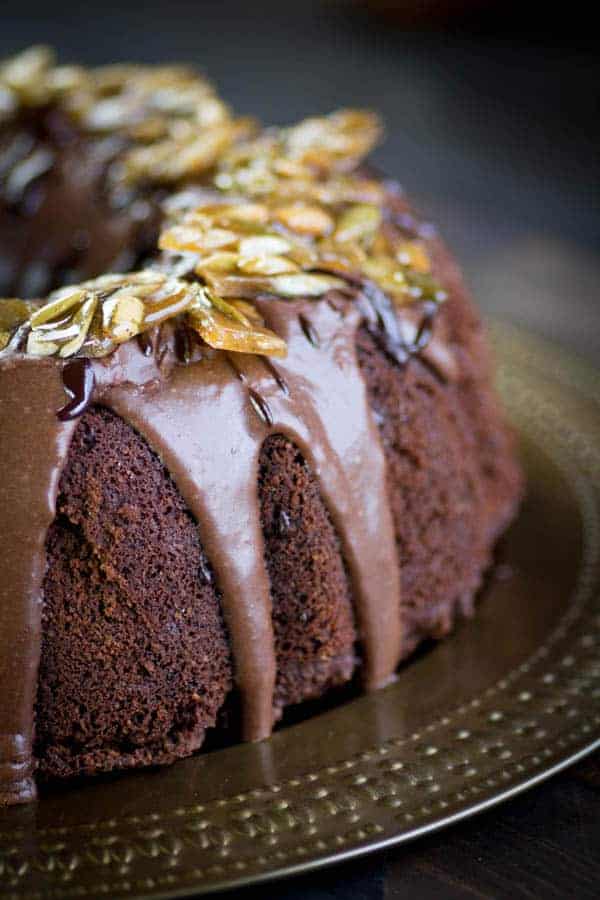 We have had multiple discussions here on B&B about bundt cakes and how much I love them!  As far as I am concerned they are the ultimate cake for entertaining. They are easy to make, look pretty darn impressive, and of course they are delicious!

For the past week or so I have been busy planning our Cinco de Mayo feast and this year I wanted to make a showstopping dessert for the grande finale. After lots of deliberation I decided that a Mexican Chocolate bundt cake was the only way to go.

This decadent bundt cake is packed with rich cocoa, cinnamon, and just a hint of cayenne for a little kick in each bite! To top it all off I doused the entire cake with a decadent chocolate icing and drizzled it with chocolate sauce. I could have left it at that and it would have been just perfect, but seeing as though Cinco de Mayo only comes once a year I had to kick it up a notch and add a layer of spicy pepita brittle to the top!

Of course, if cake isn’t your thing or it is too much of a time commitment you could totally just make the brittle on it’s own – it tastes a lot like a homemade red hot. Sweet when you first bite into it and spicy as it melts in your mouth. I’m sort of a sucker for this stuff and have been carrying a little baggie of it around in my purse for nibbling when I am running errands. It’s my guilty pleasure!

When you pair the two together it’s like fire works for your taste buds!

Our Mexican Chocolate Bundt Cake is perfect for Cinco de Mayo, Taco Tuesday, or any day of the week you would like a decadent dessert! Sweet with a little heat at the finish – this bundt cake is perfection!

For the optional chocolate drizzle

To make the glaze

To make the optional chocolate drizzle

This homemade spicy pepita brittle is the equivalent of a homemade red hot. Spicy, sweet, and totally addictive!

To toast raw pepitas: Preheat the oven to 325°F. Toss the pepitas with 1 teaspoon olive oil and spread into an even layer on a rimmed baking sheet. Roast in the oven for 10-12 minutes, stirring frequently.