Waking to freshly baked pastries is one of my greatest holiday memories. These decadent Gluten-Free Cinnamon Rolls feel like childhood.

For me, the holidays have become more about making truly memorable moments for my kids than anything else. I feel like as parents it's our responsibility to keep the traditions that our family has passed down in place for our children. We create the atmosphere and we teach our kids the true meaning of the season so that they can pass it down one day to their own children.

This year I really want to focus on creating our own tradition for our kids and I want it to be in the form of quality time together. Since they are both in school now our lives are overwhelmingly busy and even though we are all together during the week, I still miss them! (How is that even possible?) I can't think of a better way to make a memory than to have my children in the kitchen with me for a few hours creating a decadent batch of gluten-free homemade cinnamon rolls that we can enjoy together on Christmas morning!

There is nothing better than waking up to the smell of cinnamon rolls baking in the oven! I am a big fan of the fact that most of the actual work that goes into creating this recipe can be done the night before with our kids, so no one has to wake up at the crack of dawn on a holiday morning to get breakfast on the table! The whole process to make these luscious gluten-free cinnamon rolls takes a few hours, which means we can listen to our favorite holiday records while we prep the dough and even watch our family's favorite Christmas movie while we wait for it to rise.

I have to admit it took quite a few tries to get this recipe just right. I kneaded, I rolled and I baked for a solid week before these sweet gems came to fruition, but I have to say that every single second of that time was well worth it. These gluten-free cinnamon rolls are total game changers and dare I say, memory makers!

My first few attempts at baking these cinnamon rolls were honestly a bit frustrating. I was having trouble creating a soft, pillowy dough that held up when I rolled it. It wasn't until I remembered that growing up I had a friend whose mom made her cinnamon rolls with mashed potatoes in the dough. Seriously, mashed potatoes! I thought it was weird at the time, but hey, who the heck was I to judge?! The woman was a goddess in my eyes because she made us homemade cinnamon rolls for our sleepover! I'm not sure if this is just a southern thing or not, but let me tell you it was just the extra oomph these babies needed to really hit the mark in both flavor and texture.

I tried baking these a variety of different ways, but I have found that they really bake up the best when they are nestled all close together in a deep baking dish like my La Chambra handmade pottery I recently picked up from Alta Baja Market.  They rise so perfectly when they are close like that creating perfect little peaks and valleys for the vanilla bean scented icing!

Just look at those gorgeous spirals! A true labor of love that is sure to be an ongoing family tradition for the holidays in our house and who knows maybe you will be inspired to start a new cinnamon-flavored holiday tradition too.

If you’ve tried this Decadent Gluten-Free Cinnamon Rolls Recipe, I would be so grateful if you would rate it. Let me know what you think in the comments below. I just love hearing from you, and your reviews and comments really help others that visit This Mess is Ours! 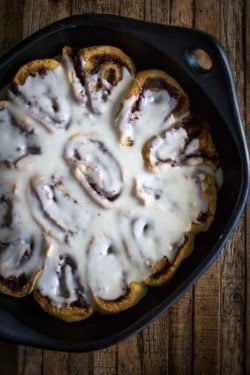 Don’t forget to rate the recipe, and let me know what you think about these Decadent Gluten Free Cinnamon Rolls in the comments below. I just love hearing from you. Your reviews/comments really help other people that visit This Mess is Ours!

Prepare the Cinnamon Rolls as directed through Step 8, except do not let rise after shaping. Cover loosely with oiled waxed paper, then with plastic wrap. Chill for at least 2 hours or up to 24 hours. Before baking, let chilled rolls stand, covered, for 30 minutes at room temperature. Uncover and bake as directed.

Why are my cinnamon rolls dry?

Too much flour is usually the reason why baked goods like cinnamon rolls become too dry. Try adding the last bit of flour by the tablespoon.

Do you ice cinnamon rolls while hot?

While you don't have to wait until they're completely cooled, you should let them sit for about 10 minutes before icing.