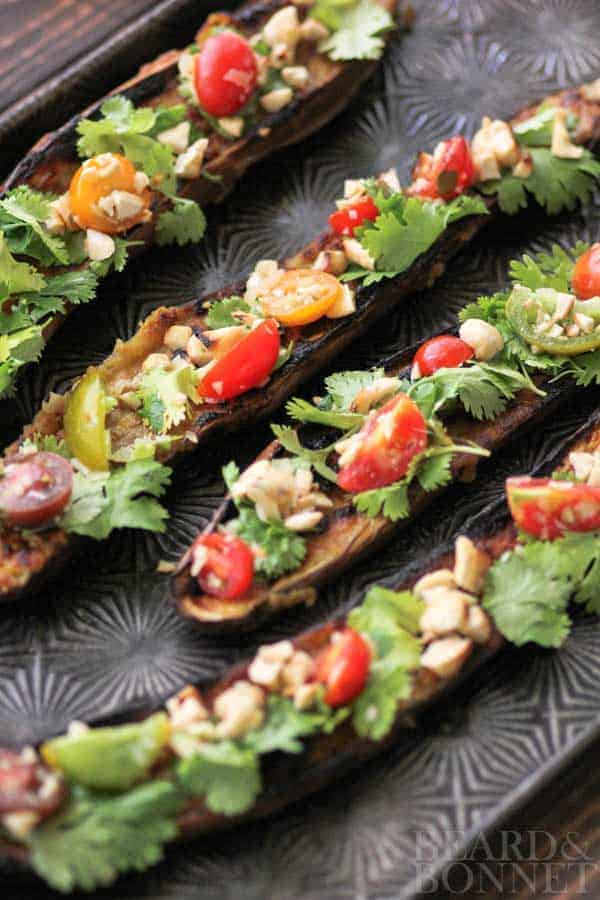 Ever since I made Stuffed Miso Eggplant for my family a few weeks ago they have been begging for more eggplant recipes. I have been roasting and grilling eggplant every chance I get since then and this take on eggplant is my family’s favorite so now I am sharing it here with you.

Long, tender Japanese eggplant are halved, scored, and brushed with oil then roasted until the flesh turns golden. A generous layer of  Thai green curry paste, miso, coconut butter, and a few other key ingredients are then slathered over the scored eggplant and broiled until crisp and slightly charred. I could eat it like this and be happy, but my family is full of people that love texture in their meals so I knew there had to be a crunch factor involved to go with the creamy eggplant. I decided to top those beautiful roasted eggplant with a salad of fresh cilantro leaves, heirloom tomatoes, pickled ginger, and roasted cashews. Todd couldn’t help, but make googly eyes at the pairing of 2 of his favorite ingredients; eggplant and cilantro. The kids were all about it too it was a little sweet, a little spicy, and super colorful which to them equals dinner perfection. Bonus: the kids thought black rice as a side dish was super cool!