While fresh artichokes are only available for a short period of time each year, canned, jarred, and frozen artichokes from California are available year round. Keep this pantry-staple on hand to make quick, easy recipes with artichoke hearts any time you want.

{{ This recipes with artichoke hearts round up and the corresponding Oven Baked Paella with Artichoke Hearts and Seasonal Veg recipe that go with it were made in partnership with California Grown! We received compensation in exchange for these posts. Opinions are always our own. If we don’t love it, you don’t hear about it. Thanks for your continued support! }}

Take my Oven Baked Paella with Artichokes and Seasonal Veg recipe for example. This delicious recipe with artichoke hearts is completely customizable to your tastes and preferences, bakes in less than 30 minutes, and is a great way to use up those odds and ends you have on hand in the crisper drawer.

What is an artichoke heart?

The sweet and soft "heart" of an artichoke is hidden beneath the tough leaves. The meaty portion in the middle is the heart.  The hair on the bottom (or the "choke") is scraped off and discarded. You will actually eat the meaty heart.

An artichoke has a somewhat crunchy texture and a blend of herbal, sweet, and bitter flavors.  Artichokes are frequently compared to Brussel sprouts, celery, or asparagus. The hearts have a softer consistency and taste, similar to the petals.

When are artichokes in season?

From March through May, fresh artichokes are at their peak. But canned, jarred, and frozen artichoke hearts from California are available all year round. Since prepackaged artichoke hearts are already cooked and ready to use they also make an easy solution for the dreaded question, "What's for dinner?"!

Who is the largest commercial grower of artichokes in the United States?

Did you know that California produces 100% the commercial artichoke crop in the United States? It's true. Artichokes were even named the official state vegetable of California in 2013!

I recently had the pleasure of visiting Ocean Mist Farms in Castroville, California, home of the annual Castroville Artichoke Festival and "The Artichoke Capital of the World".

Ocean Mist Farms was established in 1924 and is the largest grower of fresh artichokes in North America.

Each of these areas in California is known for fertile ground and productive microclimates.

Ocean Mist doesn't only grow artichokes though, they grow 30 other fresh vegetables too!!!

How do artichokes grow?

These thistles have large, toothy leaves that are light green to silvery gray in color, and grow around 32-inches in length. Together, the leaves form large rosettes that can measure six to eight feet across!

From the center of the plant, flower stalks emerge with a green or purple bud on the end of each stalk – this flower bud is the edible part of the plant. The largest, meatiest artichoke that grows at the top of the plant is referred to as the "Crown" artichoke.

Side branches will also grow from the main stalk and produce smaller heads, which are often sold as “baby artichokes.”

How are artichokes harvested?

Ocean Mist Farms artichokes are grown year-round in multiple growing regions throughout Southern California. Every artichoke plant is hand-harvested up to 30 times per season with stringent quality standards.

The farmworkers walk down the rows of artichokes with empty canastas on their back. In each gloved hand, they hold a small knife between their palm and their thumb. The artichokes are removed from the plant by slicing the stalk just below the base of the artichoke. Once full, these canastas can way 100 pounds or more. Talk about skilled labor!

Umm, yes!!! Now I can’t speak for everyone, but most people I know will agree with me that the heart is the best tasting and the "meatiest" part of the artichoke.

Are artichoke hearts different than artichokes?

An artichoke is an entire vegetable you buy in the produce section or at the farmers market.

After the leaves are removed and the hairy choke is thrown away, the very fragile interior of the artichoke that remains is what is known as an artichoke heart.

If you tried this recipe with canned, jarred, or frozen artichoke hearts I would be so grateful if you would rate the recipe and let me know what you think in the comments below! 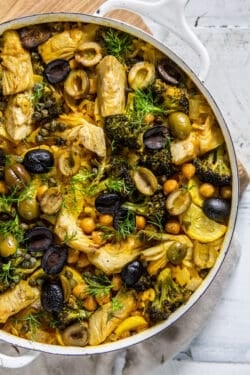 This simple Paella recipe comes together quick and easy! It's super customizable too meaning you can repurpose the bits and bobs in your crisper drawer and still be met with rave reviews at the same time.

1 banana pepper, or another mild pepper, seeded and diced

Preheat the oven to 500F, or as closely as you can get it. Warm the vegetable stock in a saucepan with the saffron.

Place a large cast-iron skillet or paella pan over medium-high heat and add the olive oil.

When the oil has heated through and is shimmering add the onion, stirring occasionally until translucent, about 3 minutes.

Add the peppers and garlic and sauté for an additional 2 minutes.

Add the rice to the skillet, and cook, stirring occasionally until glossy - about a minute or two. Stir in the smoked paprika, season liberally with salt and pepper, and then add the warmed stock, taking care to avoid the rising steam. Stir well and turn off the heat.

Quickly arrange your prepared 4 cups of vegetable toppings over the rice, sprinkle again with salt and pepper then transfer the pan to the oven. Bake for about 25-30 minutes, until all of the liquid is absorbed and the rice is dry on top. Garnish and serve immediately.

This Oven Baked Paella with Artichoke Hearts and Seasonal Veg pairs wonderfully with Chardonnay or Pinot Noir from California.

This Paella recipe has a meaty flare. It is just as easy as the veggie loaded version above and can be a great way to use up the odds and ends in your fridge like leftover grilled chicken.

It's a hearty meal that will find its way into your dinner rotation again and again!

A large supper salad speaks to me because of its simplicity. On one massive platter, you've got your veggies, greens, and protein all striking a chord together. These quinoa cakes are also delicious as veggie burgers with a variety of vegetables, condiments, and toasted gluten-free buns!

It's a good thing I have this yummy recipe for this Kale and Quinoa Bountiful Bowls on hand for the hot summer months; it only takes a few minutes to prepare, but it eats like a meal and tastes like a little bit of heaven.

Let's talk about sandwiches, like incredible vegetable sandwiches that make you drool as you eat them and leave you feeling full and fulfilled. This sandwich is the ultimate—a rainbow of colors, the right textural blend, and a flavor that is nothing short of incredible.

What more could a dip ask for? Creamy, tangy, salty, AND cheesy. I love how the cauliflower cuts through the richness of this dip. My cauliflower-hating son has no idea it's in there because it mixes in so well!  (Don't tell him!)

I love all kinds of artichoke dip and hardly ever pass up a reason to indulge in it.  But I had never tried one with kale in it until I read Kelly's book. Let's just say- I might never go back to normal artichoke dip.

I bet when you have searched for a canned artichoke recipe in the past you weren’t necessarily thinking about dessert.

But, it turns out canned artichoke hearts that are packed in water are the perfect, unexpected ingredient in my latest cupcake recipe that is featured on California Grown!